Artist and entrepreneur Louie Gong wants to bring the work of ‘Inspired Natives’ to a larger audience.
Hilary Parker 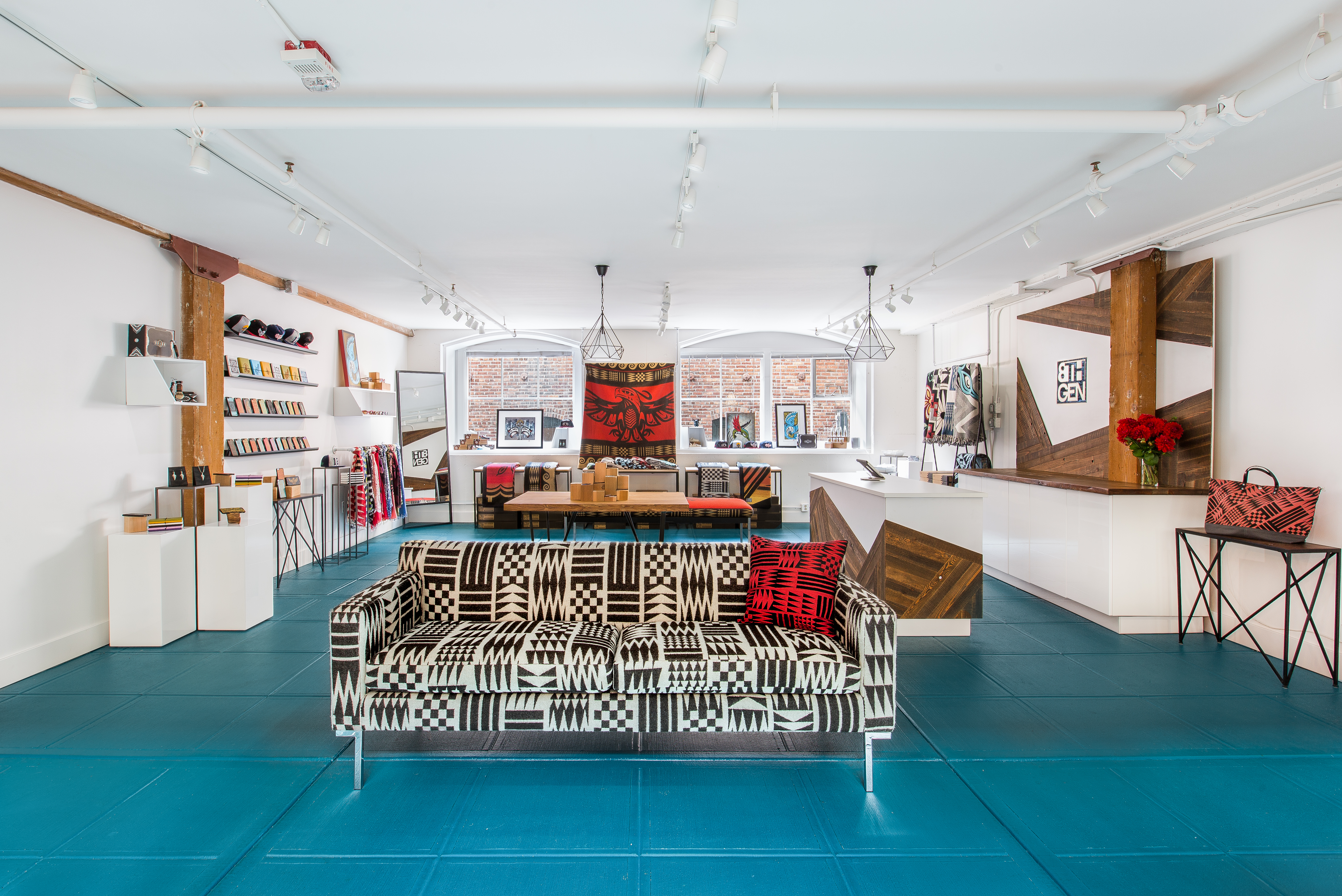 Gong sells a wide variety of Native art at his Eighth Generation store in Pike Place Market. “My art isn't available through galleries or other fine art venues, as I prefer to maintain control over my work and the stories associated with them."

When Louie Gong (Nooksack) graduated from Western with his master’s degree, he thought he’d made it.

“I remember falling back onto the grass in my front yard in the Nooksack community, thinking, ‘I did it.’”

Today Gong is among the most successful Native artists ever—something he never imagined after graduation.

Gong has found his success as an artist and entrepreneur as the founder of Eighth Generation, a business showcasing the art of Native peoples from around the country.

Eighth Generation’s flagship store is in Seattle’s Pike Place Market, with plans in the works for a second location in Portland. Shoppers are greeted by vibrant turquoise floors, ’80s music on the sound system, and products ranging from blankets to socks to smartphone cases. The works of 20 Native artists are featured in the store and online.

Eighth Generation has an additional 12,000 square feet of warehouse and studio space in Seattle, where many of the products are created and produced by employees with Native heritage.

Not only has Gong made it, but he’s bringing others along with him, and he wants the larger community to see that “Native people are thriving and kicking ass.”

Back when Gong had his “I did it” moment after finishing his master’s degree, he wasn’t headed for the world of art; his sights were set on being a counselor. Over the next several years he worked as both a school and mental health counselor, eventually moving to Seattle to work as a counseling services coordinator at the University of Washington.

The move to Seattle turned out to be the catalyst that would shape his trajectory. Upon arriving in the biggest city he’d ever lived in, Gong set out to build connections in the community through volunteering.

He began registering bone marrow donors of mixed racial heritage on behalf of the Seattle-based MAVIN Foundation, whose mission is to promote healthy communities that celebrate and support people and families of mixed racial heritage. He had first learned about MAVIN as a student at Western, when he found one of their publications at the Ethnic Student Center.

MAVIN’s mission resonated with Gong. As a mixed-race kid raised by his Chinese grandfather and Native grandmother in the mostly white farming community of Everson, north of Bellingham, his sense of identity was challenged early on. At school, with the last name Gong, he was considered Asian. At home, he was a member of the Nooksack tribal community.

“The ambiguity of my physical appearance often had people asking the question, ‘What are you?’” he says.

The experience made him reflect on his alignment with racial and cultural norms. As his understanding of his own identity matured, Gong’s role with MAVIN grew from volunteer to board member and, ultimately, to president.

The experience taught him to express his identity publicly, boldly for the first time. “It helped me silence the voice that caused me to question my authenticity,” he says.

It was during this time that Gong also began reconnecting to his upbringing through art. He began by painting Native designs on a pair of Vans sneakers he’d picked up at the mall, which got a lot of attention. He was finally swayed to start selling his art in 2008.

As his work found a growing audience on Facebook, Gong began to envision the idea that would become Eighth Generation —a way to circumvent the traditional fine art world and bring his art, and the work of other Native artists, to the masses in a more accessible way. In fact, you can’t find his art in a gallery or museum.

Eighth Generation artists depict a wide variety of Native art, such as the floral designs of the Ojibwe tribe of Upper Peninsula, geometric patterns associated with Southwestern tribes, and the colors and shapes of the Plains Indian Horse Culture, among others.

Gong’s own art draws upon the design elements of the crescent and the oval of his Coast Salish people, which doesn’t happen to include motifs of totem poles—those icons come from Alaska Native art.

Gong points out that Native art has always been used to decorate utilitarian items, so Eighth Generation, with its beach towels and tote bags, is simply bringing that utilitarian art to a larger, modern audience.

“Many people often worry about cultural appropriation,” Gong notes, “asking, ‘Can I even wear this?’”

His answer is “absolutely,” because these Native artists are choosing to share their art in this manner.

And in choosing art and products created by “Inspired Natives” instead of buying “Native-inspired” mass produced art and products, he says, “You become a caretaker of the art you love.”

Hilary Parker , '95, B.A., journalism, is a writer and editor in Bellingham. 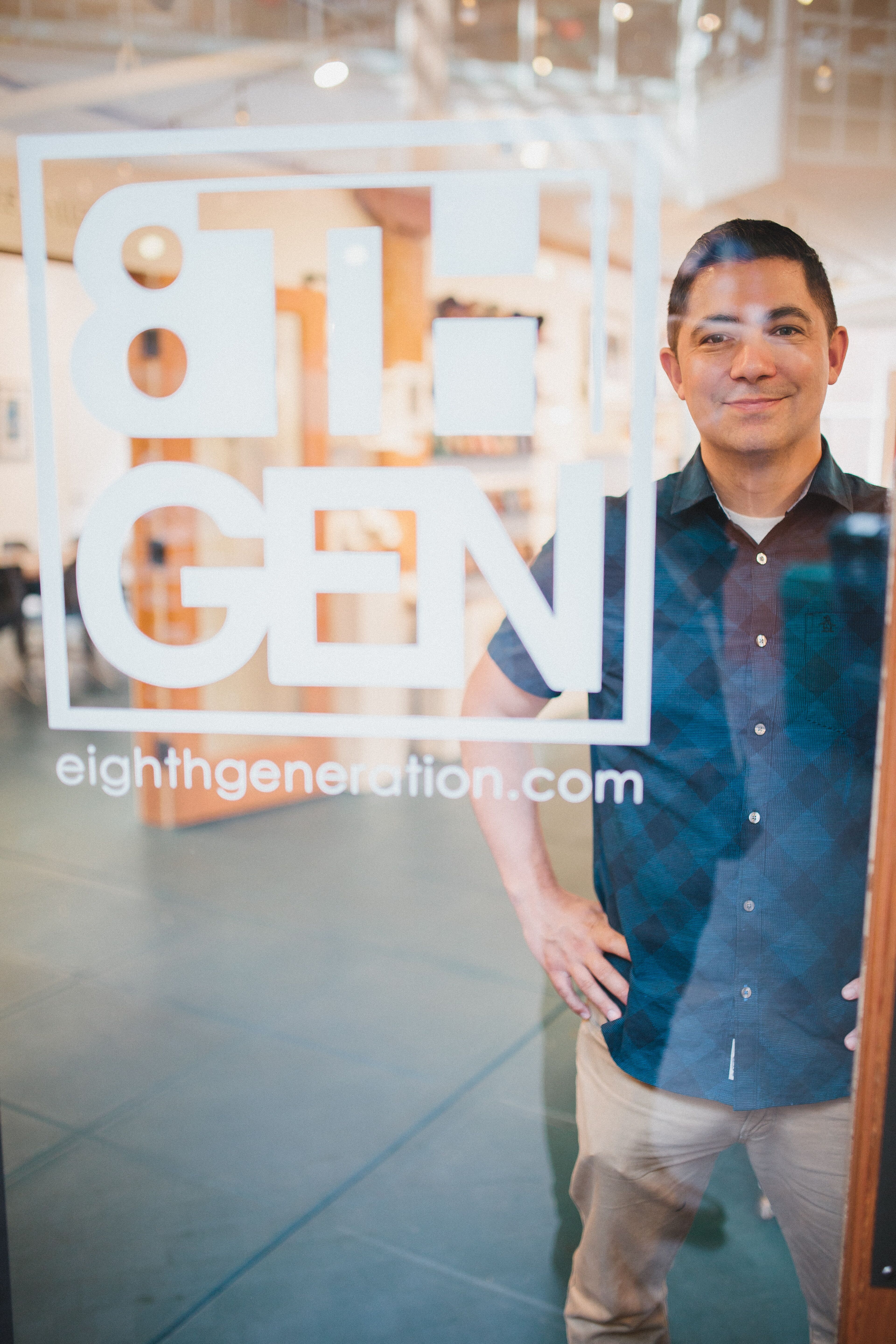 Louie Gong, the owner of Eighth Generation, is working on two public art projects in Seattle, a 600-foot piece for a light rail station in Bellevue, and an installation on the Seattle waterfront. Watch for both in 2021.