The Truth is Out Here

“If we can find evidence of microbial life on Mars, we would be that much closer to answering the question we all have: ‘Are we alone in the universe?’”
“Seeing pictures taken the day before on another planet never gets old.” 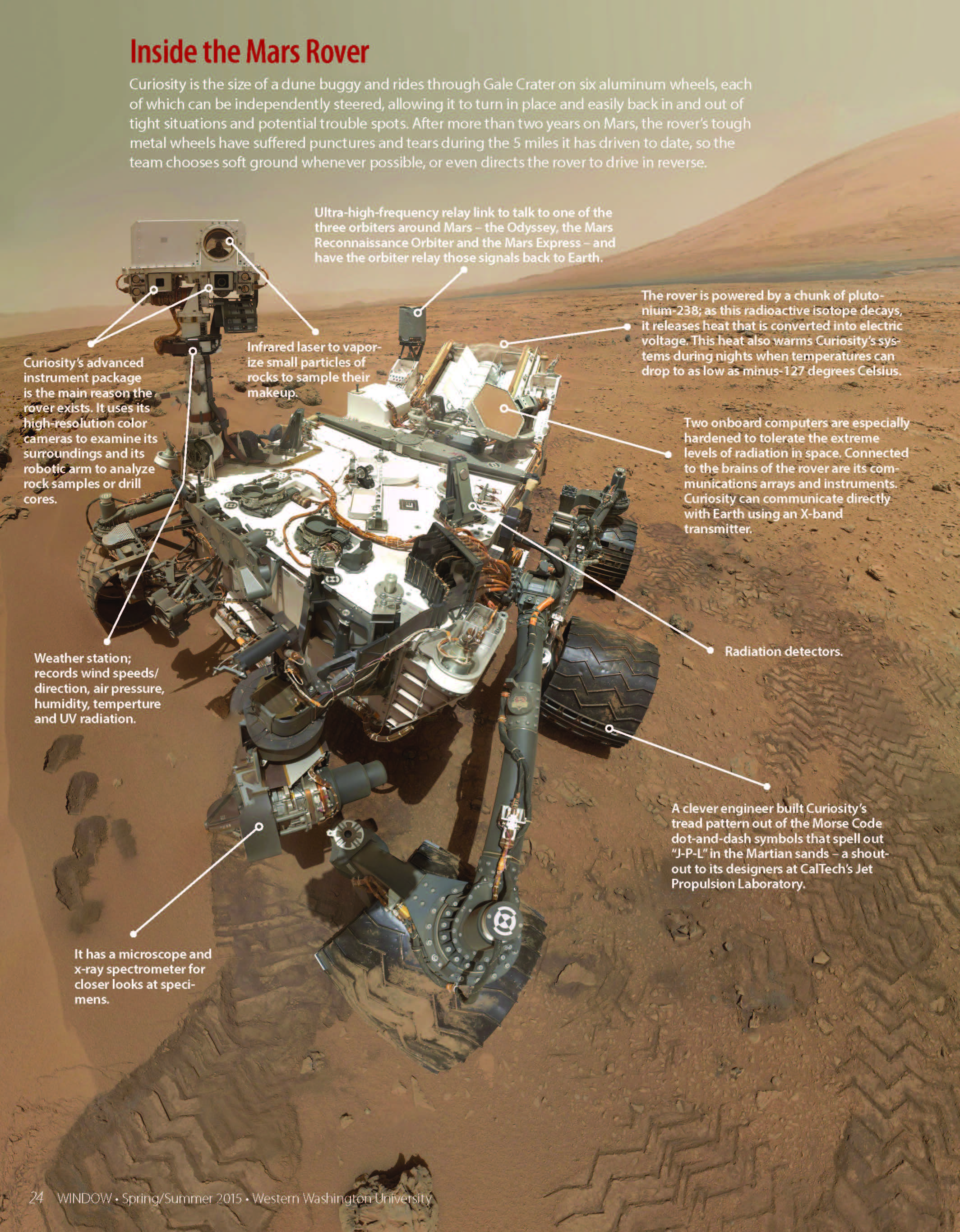 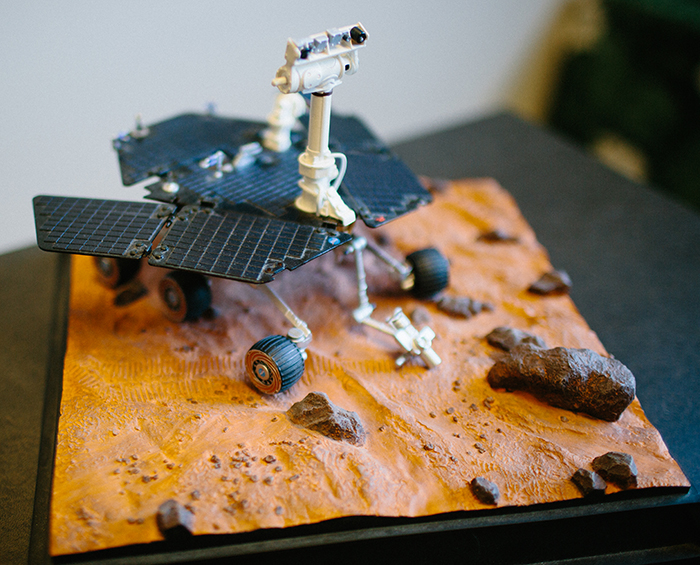 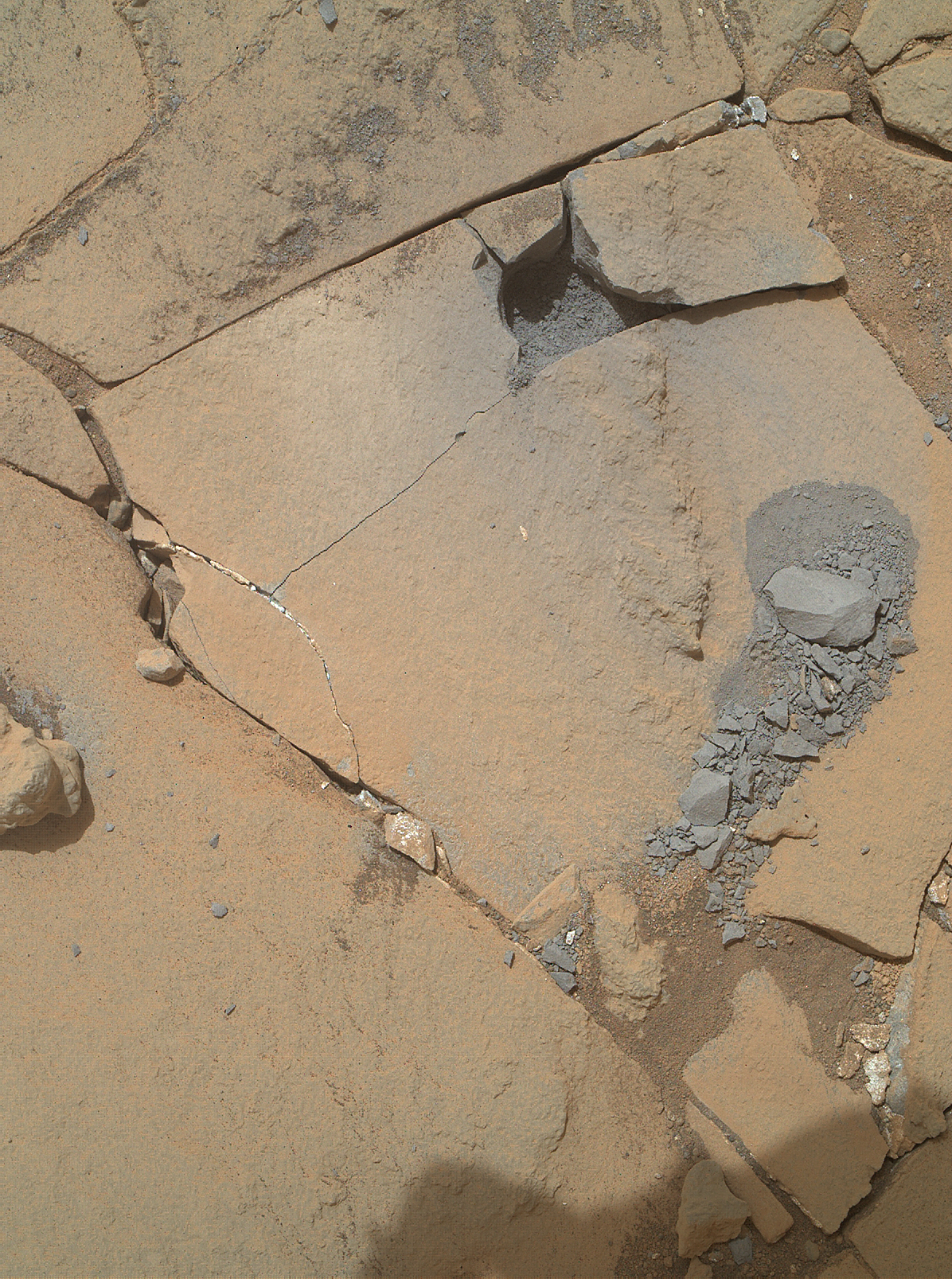 The high-resolution camera on the Curiosity Mars rover captured this image on Jan. 13, 2015, after a drill test on a rock NASA scientists call “Mojave.” The gray rocks and dust are freshly exposed fragments. Curiosity’s shadow is in the lower-right corner

Gale Crater sits on a dry, barren, windy plain where temperatures edge into the 60s only during the summer and plummet below freezing most nights. Its mixtures of sunbaked rocks, jagged scarps and deep sands make geological research a struggle.

The fact that Gale Crater is 140 million miles away and on the surface of Mars makes things even more difficult. But what’s locked in the rocks of the windswept crater may help us understand how – and where – life could thrive in the universe.

Each morning, Western’s Melissa Rice wakes up to data fresh from the Curiosity rover on the surface of Mars, and gets to work. Rice, an assistant professor with dual appointments to both the Geology and Physics departments, is part of the Science Team with the six-wheeled Curiosity, sending it new instructions and plotting its course through the harsh Martian terrain. The team tells Curiosity when to gather samples and drill cores, when to take photos and conduct experiments in its on-board lab.

“Every day brings something new. Some new discovery, or question or quandary,” says Rice, a native of Sammamish. “Solving these problems and working our way around the challenges that inevitably arise as we set about to explore another planet is why I got into science in the first place. It’s just fascinating.”

Rice came to Western this year from the Jet Propulsion Laboratory (JPL) at the California Institute of Technology in Pasadena, California. She completed her bachelor’s degree in Astrophysics at Wellesley College and earned her doctorate at Cornell, which is where she first started working on the rover teams.

Designing and building a rover and then launching it into space and landing it on another planet is obviously an immense effort. So why do it, and why Mars?

But why go to another planet at all?

“The things we discover on Mars help us understand that puzzle we are all trying to put together: Where else in our universe could life exist?” she says. “All our work and experimentation and data gathering in some way ties in to that most basic question.”

Water, or evidence of it, has brought Curiosity to Mars. Scientists think Gale Crater’s surface has been altered by water erosion – river beds, lakes, alluvial fans – and that this water existed for enough time to allow life to potentially form.

Mars still has quite a bit of water locked into ice caps at its poles, but at one time, Mars had enough standing water – for a long-enough time – to support microbial life. Long, long ago, the planet’s water and atmosphere were not too acidic, salty nor laden with chemicals to have prevented life.

Each day for the past 33 months, Curiosity has picked its way through ancient riverbeds, sand dunes and dry deltas with names like “Rocksnest,” “Yellowknife Bay” and “Pahrump Hills,” guided by instructions from Rice and the rest of the science team, always on the lookout for that next crucial piece of the puzzle.

Curiosity has examined all sorts of terrain in its trek, from sharp chunks of basalt and other igneous rocks formed by the planet’s now-dormant volcanoes to flat areas of mudstone in ancient lake basins compacted by water that existed hundreds of millions of years ago.

Over everything, pushed about by the omnipresent scouring winds, is a thin layer of reddish iron oxide dust that gives the planet its nickname. These features are not exactly the “primordial stew” from which life will spring anytime soon, but the clues to NASA’s questions lie not in the planet’s present, but in its past.

“If we can find evidence of microbial life on Mars, that would open whole new windows into what we could expect to be happening elsewhere,” she says. “We would be that much closer to answering the question we all have: ‘Are we alone in the universe?’”

So what happened to Mars to turn it from a planet very much like Earth – cloud cover and a mild climate – into what it is today?

“That’s a really good question,” Rice says. “We’re not sure. One theory is that the solar winds slowly stripped the atmosphere away. Another is focused on the potential of asteroid strikes doing it.” A new NASA orbiter, called MAVEN, just arrived in Mars’ orbit with the main goal of sampling the atmosphere to try to answer that very question.

Taking a turn at the wheel

Rice and her team are on the “rover shift” about five days a month. Each morning she downloads images taken by Curiosity the day before as the rover slowly pushes through Gale Crater, ever closer to its eventual goal – climbing 18,000-foot Mount Sharp, which looms over the crater like a Martian version of Mount Rainier.

“Seeing pictures taken the day before on another planet never gets old,” she says. “When I start taking that for granted, it will be time to stop doing this work.”

The science team evaluates these images and, via a conference call, decides the next few tasks for Curiosity. Objectives can range from “drive to that rock and take a photograph of it” to “drill a core sample at location X” to “move from point A to point B.”

The wishes of the science team are then sent to the engineering team, who turn those concepts into computer code and send them off to Curiosity. Everyone then watches to see how the instructions are carried out and then begins the process again the next day.

Unlike previous rovers such as Opportunity, which landed on Mars in 2004 and was only supposed to stay active for 90 days but is somewhat miraculously still chugging along doing valuable research work, Curiosity has its own onboard science laboratories. This means it can not only photograph Martian rocks and analyze them with its rover arm, it can extract rock cores and do experiments on them using sophisticated equipment within the rover’s body, including X-ray diffraction and evolved gas analysis.

Being a member of not one but three (counting the upcoming Mars 2020 mission) rover science teams is something of a coup, as many hundreds of scientists from around the world apply for the few spots available for each mission. Rice credits her work as a graduate student in getting her foot in the door, with her experience since then making her more valuable to the teams.

“Two of the previous rovers, Spirit and Opportunity, were being operated at Cornell while I was there getting my doctorate, so I was able to be hands-on from the beginning,” she says. “And my following postdoc work at the JPL continued to be rover-focused, so that helped as well.”

Bringing Mars into the classroom

While Rice loves her work on the rovers, she is equally excited to make them part of her classroom experience at Western. She is teaching classes on planetology, geology and astronomy, and she will have her students use data from NASA to help study potential landing sites for the Mars 2020 mission, using an updated version of the Curiosity rover.

As is the case with Curiosity, the 2020 mission will continue to push toward finding that Holy Grail: evidence of life elsewhere.

“It’s a fascinating endeavor, this idea of exploring other planets to find what they can tell us about the rest of the universe,” Rice says. “And being able to share it in the classroom – to perhaps promote that spark of interest in one of my students the way it was for me – makes it even more rewarding.”

John Thompson is Western’s assistant director of the Office of Communications and Marketing. He has been obsessed with space since he first saw James Tiberius Kirk step into a transporter in 1969.

Long, long ago, Mars was habitable, and the water was not too acidic, salty or laden with chemicals to have prevented life. 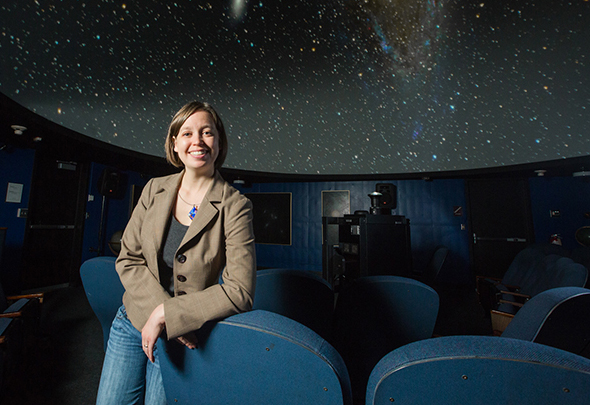 Each morning, Western’s Melissa Rice wakes up to data fresh from the Curiosity rover on the surface of Mars, and gets to work. 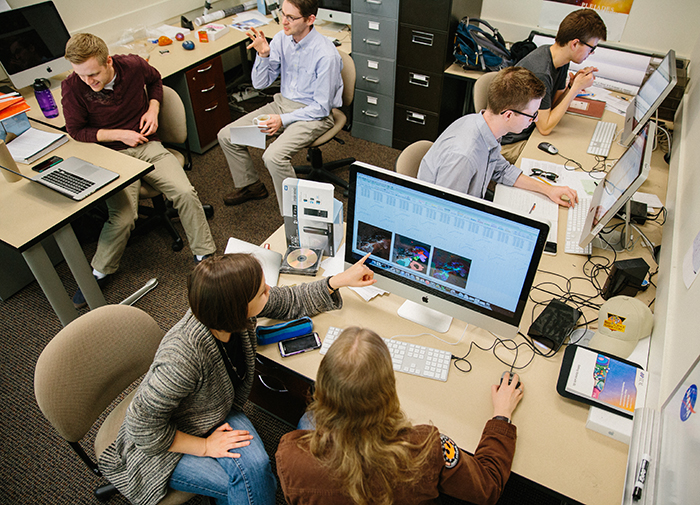 Melissa Rice, working here with junior Katherine Winchell, teaches classes on planetology, geology and astronomy and has students use data from NASA to help study potential landing sites for NASA’s next Mars mission. 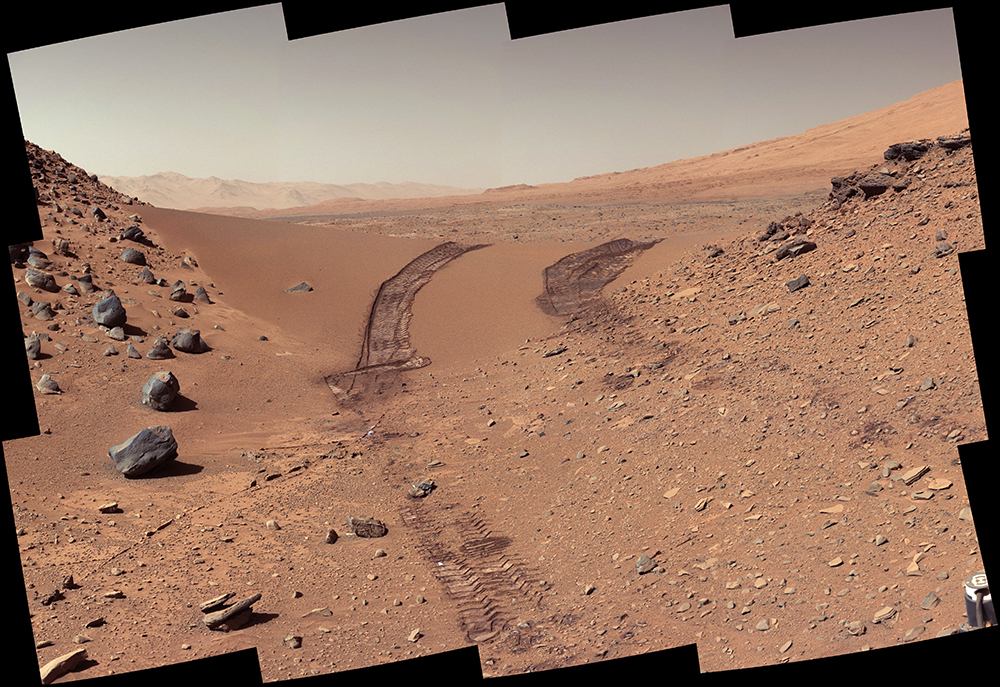