Some days you go to work, sprint down a sheet of ice, fold yourself in like human origami and just hang on

Alex Harrison is a member of the U.S. men's Bobsled Team
Meri-Jo Borzilleri

Ever since he was 16, Alex Harrison wanted to compete in the Olympics.

He never thought his best chance would be hurtling 80 mph down an icy mountain chute in a bobsled.

“It’s more violent than you imagine,” he says, “like a roller-coaster riding over center bumps on the freeway…You feel every one of those bumps because (the sled has) no suspension.”

Trimmed of most creature comforts for weight and aerodynamics, bobsleds are bare-bones, carbon-fiber shells with runners attached. Sleds have no seat belts, shocks or padding. Bobsledders wear burn vests to keep from losing skin to the ice during a crash.

Harrison (’10, Kinesiology; ’11, M.S., Human Movement and Performance), who took his first trip in a bobsled last fall, was part of a USA II sled team that finished 12th (two-man) and 14th (four-man) at February’s world championships in Winterberg, Germany.

Most athletes take two years of development to compete at the top level. Harrison, a former two-time NCAA Div. II All-American in track and field at Western, took just months.

That puts him on the fast track toward a possible berth in the next Winter Olympics, set for 2018 in Pyeongchang, South Korea.

“I never would have expected that in my wildest dreams,” says Harrison, from Edmonds.

The 6-foot-1, 220-pound Harrison, 27, was a push athlete in two-time Olympian Nick Cunningham’s sled for many races on the World Cup tour, bobsled’s major leagues.He spent more than two months competing in Europe on the world’s most famous tracks in places like Austria, Switzerland and Germany. He briefly was part of the USA I sled, piloted by 2010 Olympic champion and five-time world champion Steve Holcomb. Harrison also pushed for Codie Bascue’s USA III sled as coaches juggled lineups to produce the best push-start times. Sleds can weigh close to 500 pounds.

“He has an attitude of ‘Put me in, Coach, anytime, anywhere,’” says Mike Dionne, U.S. Bobsled development coach. “There’s no resistance being put with other drivers. He’s ready to race with anybody at any time. I constantly see Alex hitting the weights and sprint workouts.” It has all been a rush for Harrison. He played baseball before college, then competed in decathlon and javelin in hopes of someday making an Olympic team.

Harrison’s athletic career was winding down when, while pursuing a Ph.D. in sports science at Eastern Tennessee State University, his now-fiancee, former Western hurdler Michelle Howe (’12, Kinesiology), suggested bobsled might be a good fit.

Harrison went to tryouts partly to humor her, not wanting to be disappointed by failing at a new sport.

Both he and Howe made World Cup teams (women’s bobsled has been an Olympic sport since 2002). But Howe was cut from the squad partway through the season and has moved on to explore the sport of skeleton.

It has been a steep – and icy – learning curve for Harrison in a sport where races can be decided by hundredths of a second over four heats.

A brush against the wall or a slight slip at the start could cost valuable time. So can rookie mistakes like Harrison has made: sitting too high, bumping into teammates on entry, leaving the push bars up instead of pulled inside.

In bobsled, small things have big consequences. For Harrison, trying out for bobsled was a small thing.

Look at him now.

Meri-Jo Borzilleri grew up in Lake Placid, N.Y., and has covered four Olympics as a sports journalist.

Bobsled photo by by Patrick Hendrick 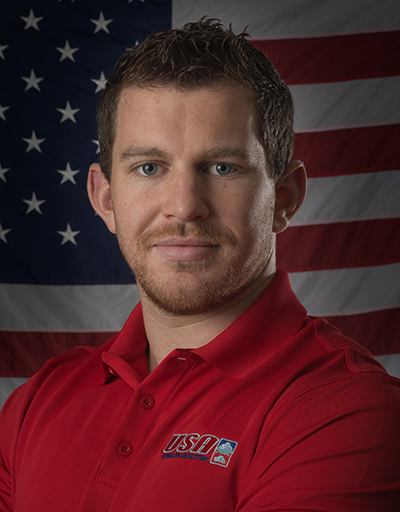 Alex Harrison is a member of the U.S. men's Bobsled Team