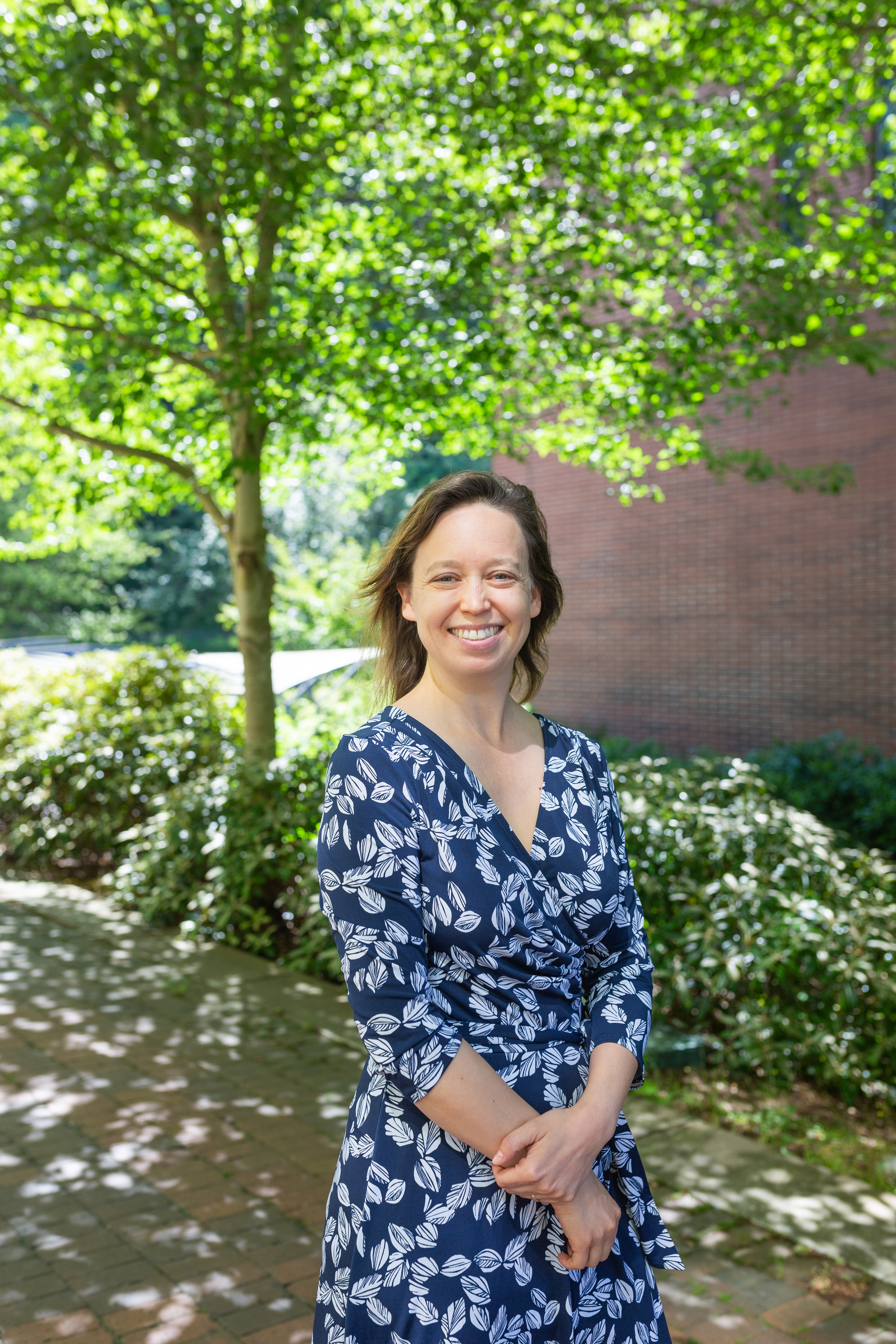 After 60 days of working nights—Martian nights —WWU Associate Professor of Geology Melissa Rice was ready for a break.

Rice, a member of the science team for NASA’s Mars 2020 rover mission that landed on the Red Planet on Feb. 18, spent the first two months of her tour working a schedule that coincided with Martian nights. Working 10-hour shifts, the team sent instructions to Perseverance for the next day, and assessed the data that had been procured by the rover the day before.

Mars days are about 40 minutes longer than ours, so Rice’s work schedule started a little later each Earth day. There were big chunks of February when Rice would get up for her shift after the sun had gone down and finish her workday before it rose.

“For the first month, we ran on pure adrenaline. Our first shift started a few hours after touchdown on Feb. 18. Every image we got from the rover was new and exciting,” she says. “But after about 30 days, we saw a second shift of all-nighters coming ahead, and it’s just … so … hard.”

NASA soon moved the science team to 60-day tours, “because frankly we were all so exhausted,” Rice says.

What’s ahead for Percy?

By Day 104 this spring, the team had transitioned from the “shakedown cruise” portion of the mission to doing science each day.

“This mission is going to be incredible,” Rice says. “The scope of what we can ask of Perseverance is just so much greater than what we could ask of previous rover missions like Curiosity or Opportunity.”

For one thing, Perseverance, nicknamed “Percy” by its Earthbound crew and support staff, is carrying its own air support in the form of a small drone named Ingenuity.

Like a mother kangaroo with her baby, Percy carried Ingenuity around Mars for the first 30 days, then sought out a flat spot as a helipad. This was followed by about a month of flights and image gathering—the first ever flight of an aircraft on another planet.

“This whole mission is a huge ‘Wright Brothers moment’ for NASA, for sure,” she says. (It was also a huge moment for Amelia Cook , ’07, MBA, whose Goodwinds Composites in Mount Vernon supplied the material for Ingenuity’s legs.) “The imagery from Ingenuity fills in the gaps between the ground-based images that Perseverance will take, and the images from the orbiters circling the planet,” Rice says.

Picking their way up the riverbed

Western alumna Tina Seeger, a former student of Rice’s who is getting her doctorate at Cal Tech while working directly with NASA through the Jet Propulsion Laboratory, is just as excited as Rice about Perseverance’s mission in Jezero Crater. The massive bowl on the surface of Mars is almost 30 miles across and thought to have once been flooded by a now long-gone Martian river.

“Jezero Crater has a rich geologic history, and I am floored to be a part of detangling the complex rock record from the observations that will be collected as we drive around,” Seeger says. “It’s been really special to be a part of the Perseverance team during development—I came onto the Curiosity rover team several years after landing, so it was a well-oiled machine by then.”

Seeger wasn’t the only one excited about Percy’s landing—a few weeks after touchdown, Seeger and Rice had a Zoom call with Gov. Jay Inslee to update him on the mission and its goals. U.S. Rep. Rick Larsen stopped by Rice’s Mars lab recently for an update, as well.

“They were both super-interested, which was nice to see,” says Rice.

Seeger is one of the many graduate and undergraduate students who for seven years have contributed directly to Perseverance’s mission.

Student research projects informed the design of the Mastcam-Z instrument, a pair of telephoto-enabled cameras that are the rover’s “scientific eyes.” In 2016, Rice and her research students hosted the entire Mastcam-Z instrument team at Western for their annual in-person meeting. In 2019, more students accompanied Rice to Malin Space Science Systems in San Diego to test and calibrate the cameras, and now four Western alumni have jobs there.

Western students also helped select Jezero Crater as the rover’s landing site, and some of those same students helped create the geologic map that NASA’s Perseverance team uses each day to plan the rover’s route.

And Mastcam-Z is already providing stunning new visuals from the planet.

“We’ve already uploaded tens of thousands of images from this mission. We can see in the pictures where Percy will be in a year, and the far horizon where it should be in about two years. It’s incredibly exciting,” Rice says.

At Day 104 of the mission, Rice says Percy was already doing what no other rover has done: starting to fill its pockets.

Percy has room for 39 sample tubes, and eventually, it will leave those samples in a collection site on the surface. In 2027, the next Mars mission with the as-yet-unnamed “fetch rover” is scheduled to go to Mars, land, and fetch the collection left by Percy. This mission will be the first to land and then lift off again from Mars, but will only be able to get as far as Mars orbit. A third mission, no sooner than 2029 (the window to go to Mars opens every two years) will go to Mars, grab Percy’s collection from Fetch, and return it to Earth.

“This is the kind of planning that has to happen just to get a sample back from Mars,” says Rice. “And each new step is always something we’ve never done before. But it could be more than a decade before the samples that Perseverance is collecting get back to Earth.”

Each mission, and each new hurdle cleared, builds the science for the next mission, with the goal of one day sending humans to study there.

“Every time we send a rover to Mars, it’s obsolete by the time it gets there because of the advances made between building the rover and when it lands,” she says. “But we get more and more efficient. So perhaps one day we can send a rover and have it return its cargo in one mission instead of three? Everything we learn now helps us plan and grow the possibilities for later.”

For example, Rice says one of the on-board experiments being run by Perseverance is called MOXIE, which turns carbon dioxide from the Martian atmosphere into either breathable oxygen potentially useful to human colonists or liquid oxygen that could be used as rocket fuel.

In the end, all the effort, all the planning, all the missions—they all come down to trying to answer one central question.

“Was there ever life on Mars? That’s ultimately what we are seeking to find out with this rover mission, every image, every experiment,” she says.

Setting down next to an ancient riverbed in a crater that was once a giant lake gives them the best chance to find that answer.

John Thompson is the assistant director of Western’s Office of University Communications. A certified sci-fi nut, he eagerly awaits confirmation that life once existed on the Red Planet, and the implications that has for the rest of the cosmos.

John Thompson is the assistant director of Western’s Office of University Communications. A certified sci-fi nut, he eagerly awaits confirmation that life once existed on the Red Planet, and the implications that has for the rest of the cosmos. 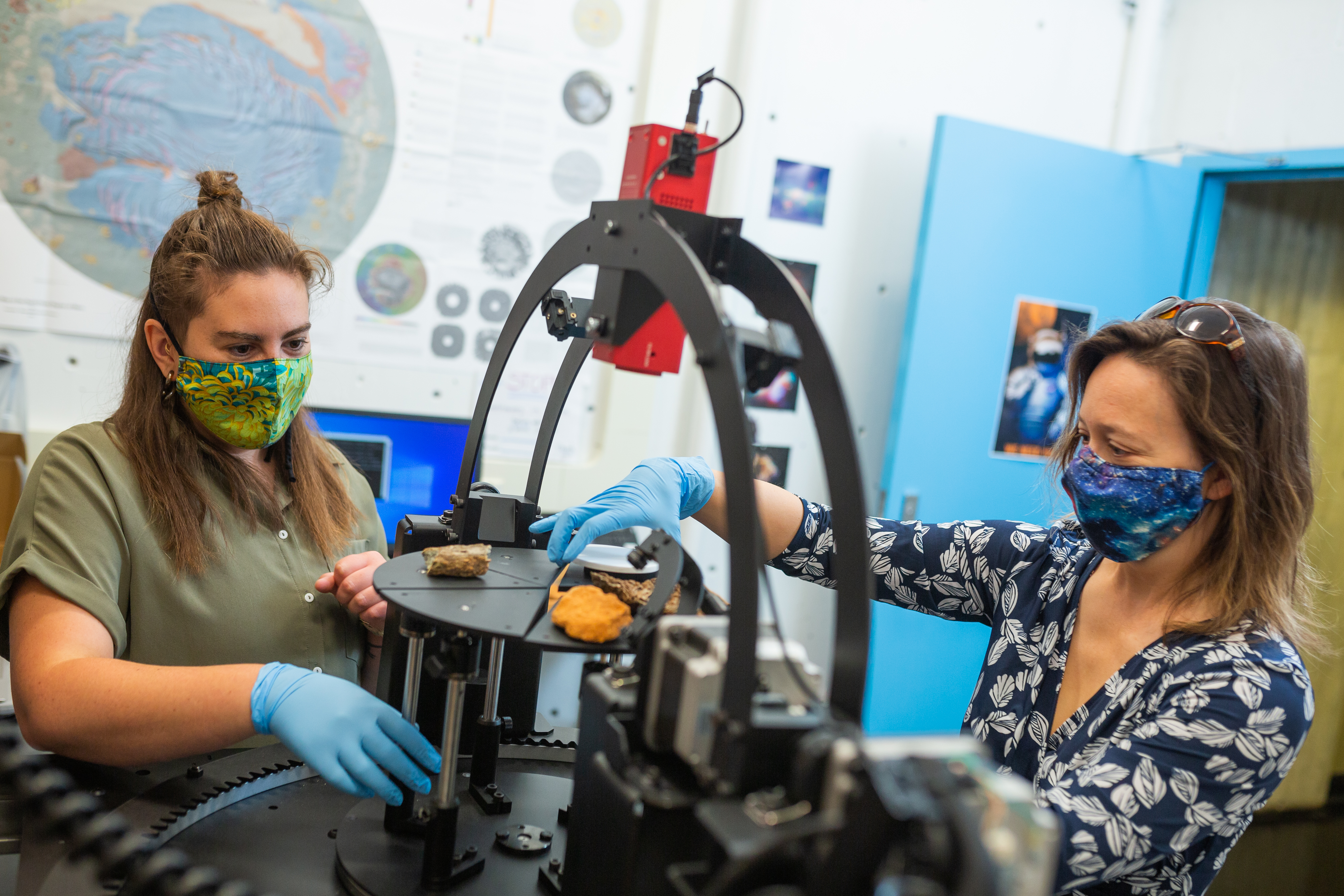 Kristiana Lapo, ’16, M.S., geology, a lab assistant in the Western Mars Lab, works with Geology Professor Melissa Rice to study rock samples with a highly specialized goniometer, an instrument that measures how light is reflected from the surface.