Are 'compostable plastics' part of the solution? Yes and no

“Compostable plastics” and “degradable tech” are all the rage in the industry these days, and John Misasi says that is for good reason—they really do what they claim to do—they WILL break down into compost, unlike that traditional-plastic kitchen spoon which will be sitting unfazed and unchanged in a landfill 100 years from now.

And yes, you probably saw this coming—there is a “BUT” involved, one big enough to cause the normally compost-loving state of Oregon to nix compostable plastics from its state composting operations.

Here’s the problem: Yes, compostable plastics break down, BUT they don’t do it at the same rates as normal compostables, AND, when combined with those typical composting items, they add significantly to the time it takes for them to turn from leaves and watermelon rinds into the black gold known as compost.

“There are a couple of things to think about here,” says Misasi. “First, even compostable plastics don’t break down in landfills. Landfills, by their nature, are anaerobic, moisture-free environments. The waste is packed down and smashed and packed some more, until all the air is squeezed out … and then it is capped so that water will never intrude. Airless and waterless is not the way to promote composting.”

“So these items need to get sent to industrial composting operations, not landfills. But then, the commercial operators know that the time it will take a particular sample to evolve from plant-based waste to viable compost triples when compostable plastic is added— that’s how much longer it takes,” he says. “The bottom line is why would you wait three times as long for the same thing, like 18 weeks instead of six? It’s a tough sell.”

Misasi said this isn’t the death knell for a boom in compostable plastic that was just starting to happen—but it does mean more planning and better sorting of plastics needs to happen for it to really take off.

“If we can make it easy and profitable for the industry to move forward, they will,” he says. “But we have work to do.” 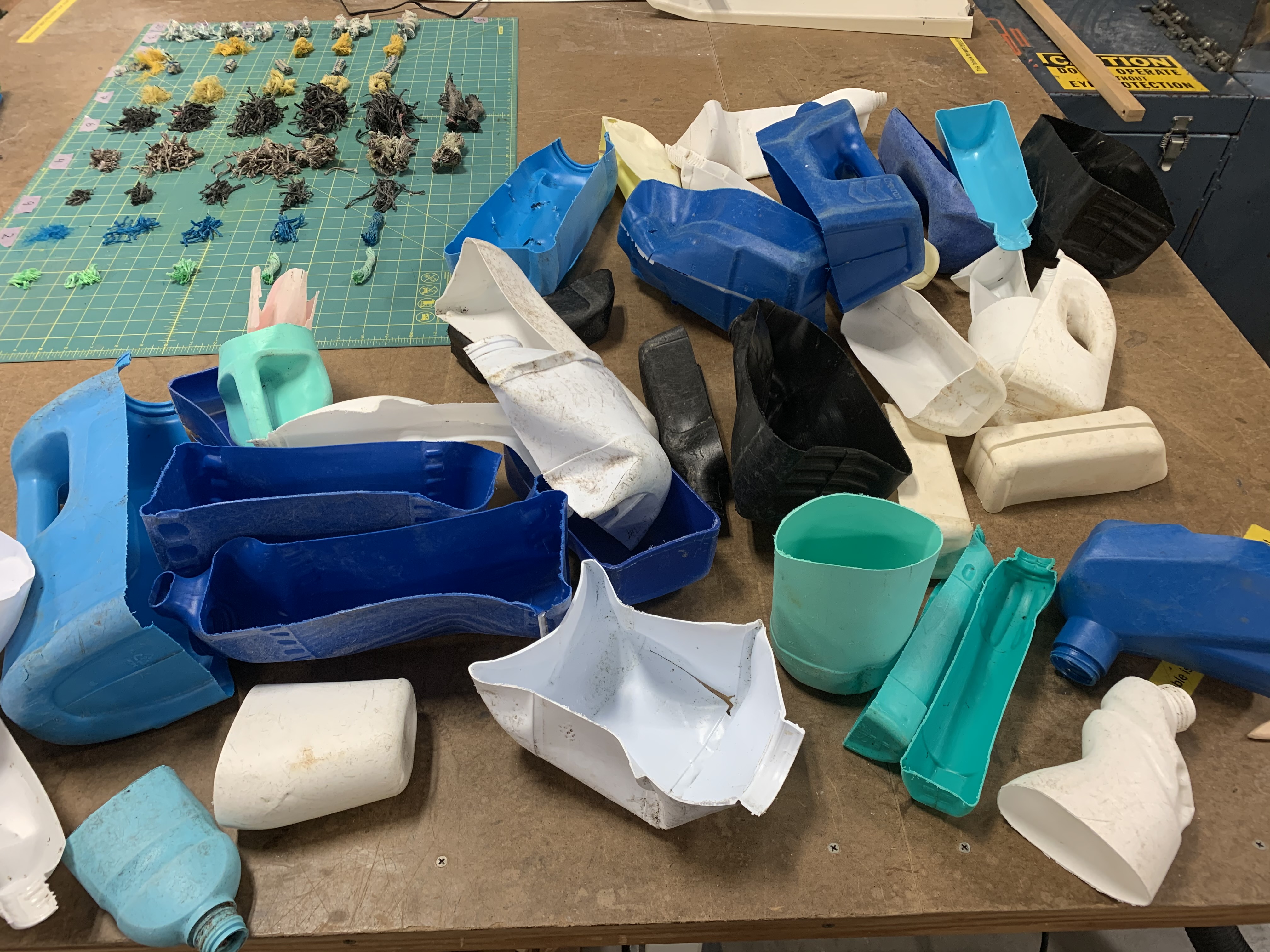 Due to their low densities, polyethylene and polypropylene like this make up over half of the plastic found in the ocean.

For baby boomers, at least, one of the most famous lines in cinematic history is from the groundbreaking 1967 film “The Graduate,” as a young, posh Dustin Hoffman is cornered by a family friend at his graduation party and admonished to listen to one single word of advice, eight letters that would open doors to a lucrative and adventurous career: “Plastics.”

And while it’s a classic line from a classic movie, it’s as out-of- date as Hoffman’s sideburns and wide tie.

“Such a cliché, but it is an interesting take on how the industry was viewed 40 years ago, versus how it is viewed today,” says WWU Associate Professor of Engineering and Design John Misasi.

If that conversation occurred on film today, Misasi says that an entrepreneurial neighbor might instead lay out three words of advice: “The Plastics Problem.”

What is the circular economy?

Helping push forward a new circular economy around plastics is a huge part of what Misasi and his students are studying in his lab.

Misasi described the concept of a circular economy as a closed-loop system: At the beginning of the cycle, a product is made out of plastic, goes through its life cycle and is discarded, but not into a landfill. Instead it’s sent to a specialized recycler that either performs automated plastic sorting for a more traditional recycling approach, or reduces plastic to its component petrochemical parts, which are then remade into a new product.

The circle just keeps repeating: New plastic isn’t needed and no plastics are discarded, as the economic cycle designs out waste and pollution, keeps products and materials in use, and regenerates natural systems. Sounds great, right? Someday, it will be.

“We simply don’t have the systems in place to make this work yet, and the demand for recycled plastic is still relatively low,” he says. “A big part of what we do in this lab is to work to find ways to increase that demand and establish benchmarks and formulas for remade plastic that the industry can use.”

For his students, this is the kind of future of plastics they get excited about. Juliana Covarrubias, a plastics and composites engineering major from Dearborn, Michigan, says their research work to help industry evolve can be broken down into two distinct phases.

“The first is to dial in a mechanical recycling process to provide a road map for recyclers,” Covarrubias says. This involves collecting plastics, grinding them down into multicolored flakes , then melting these bits into a slurry that is pushed through a machine called an extruder, resulting in clean, new plastic pellets that are ready for use by manufacturers.

“The second (phase) is to report the chemical, thermal, and mechanical properties of our recycled samples so manufacturers are better able to determine possible applications for the recycled material,” she says.

“I think it is the plastics engineer's responsibility to make use of plastics in a much more efficient and less wasteful way. This could mean searching for recycling solutions for products and materials we currently throw into landfills or designing plastic parts with the intent that they will have a longer lifespan,” he says.

Misasi agrees. The industry itself has been a big part of the problem, he says, with over-designed products that use too much plastic. “They could have been made with other materials, or made to last longer and not be so disposable. That cycle is starting to finally swing in a more sustainable direction, and can be reshaped through a more diverse industry ecosystem that incorporates less plastic and relies on a much more robust recycling effort.”

So where to go to find these reusable plastic resources to jumpstart this new circular economy of plastics? Landfills, once capped and completed, are not likely to ever be permitted to be torn up and sorted through for recyclables. Sadly, Misasi says, the answer may lie to our west—at sea.

Where the world’s plastics wash ashore

The forested coastlines of Afognak Island, part of Alaska’s Kodiak Archipelago, seem pristine at first glance , the unspoiled miles of deserted beaches left mostly in the care of the island’s brown bears and Roosevelt elk.

Sadly, that perception is far from accurate. The island’s location at the end of the North Pacific Gyre, an enormous ocean current swirling counterclockwise across the Pacific Ocean north of the equator, deposits hundreds of thousands of pounds plastic from North America and Asia onto Afognak’s beaches each year.

A horrific amount of waste, yes, but also a trove of ocean plastics to be harvested and recycled by Misasi and his students.

“Most ocean plastics that wash up on the shores of places like Kodiak have, in some way, degraded from their original chemical composition,” Misasi says. “But that doesn’t mean they don’t have value as recyclables. What we are trying to do is figure out how these ocean plastics, in their various degrees of degradation, can be broken down, mixed, and recombined into new compounds just as good—or better— than their original form.”

One of Misasi’s students, Christofer Owen of Sammamish, spent five days at Afognak last year as part of a beach cleanup effort funded by a grant through the Ocean Plastics Recovery Project, the Island Trails Network and the National Fish & Wildlife Foundation.

“I was excited to see firsthand the places where the plastics we have been working on actually come from, and the island is just as incredible as I thought it would be,” he says. “The beaches we cleaned up at first glance often looked quite pristine. But you have to go up over the lip of the high-tide line and into the woods to find all the plastics that haven’t just washed back out to sea.”

Fishing gear, nets, buoys, shoes, large and small chunks of Styrofoam—the beaches of Afognak had them all.

“We pulled 5,000 pounds of old nets off of Afognak’s beaches,” he said. “A storage container washed off a ship seven years ago that was full of plastic flyswatters, and some of them are still washing up on Afognak today. These things just don’t go away.”

So far the results of their work to recombine and reuse ocean plastics have been extremely encouraging, and have produced compounds using three major plastic types that were far more elastic and less brittle than compounds made from just one type of recycled plastic—proof that the circular economy is possible using recycled plastics, with, at the moment, limitless resources in ocean plastics alone.

Their work on recombining different types of ocean plastics to produce high quality new plastic ready for re-use will continue, and while a return trip to Afognak was canceled because of the pandemic, the organizations working on the cleanup efforts there are eager to see Western students back on the island when the virus is under control.

In the end, Misasi says that no amount of work on reusing plastics will keep them out of landfills and off beaches without significant shifts in behavior by the two most important parts of any type of economy, circular or otherwise: the manufacturer and the consumer. One way to push forward on the manufacturing side is to put into place new policies that help prevent plastic waste—anything not recycled or reused—from being manufactured before it can even get into a landfill.

“Until we—and I mean the ‘big We,’ as in humanity—are willing to consume less stuff, managing our waste will always be an uphill battle,” he says. “And that starts with education and awareness on all our parts. We need to emphasize the ‘reduce’ part of reduce, reuse, recycle if we want to make a real dent in the plastics problem.”

John Thompson is the assistant director of University Communications at Western. After a quick scan of the last bunch of recycling he put out on his curb, he very much realizes he is part of the Plastics Problem. 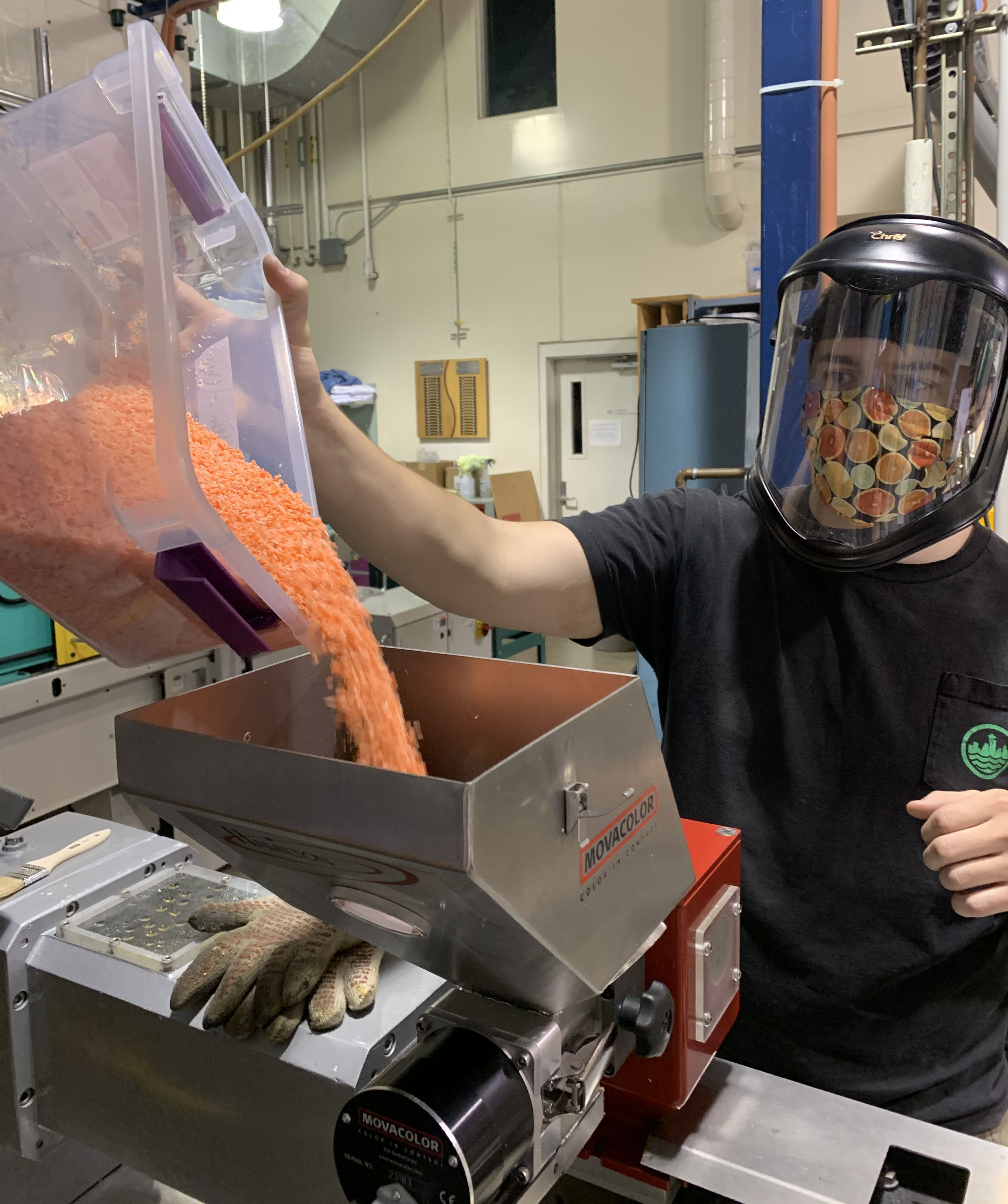 Senior Christofer Owen loads ocean plastic polyethylene from buoys into the twin screw extruder for the final step of the mechanical recycling process. His research found that even highly degraded ocean plastics can have useful properties.