At the height of the Great Depression, Alice Cowgill (’31, Teaching Certificate) graduated from Washington State Normal School and went to work at a school in Ferndale, teaching grades one through 12 in a single classroom, until she married the love of her life, Gordon “Bus” Fraser.

Fast-forward to 2015, and the Frasers’ legacy at Western is set to reach thousands of students. The Frasers left gifts to Western totaling more than $8 million, the largest gift in Western’s history, which will support scholarships for public high school students from Whatcom, Skagit, Island and Snohomish counties. Several academic areas, such as music, biology and the College of Business and Economics will also benefit. And a new Fraser Lectureship will bring internationally known scholars to the university.

The Frasers first decided to support Western in 1986 – Fraser Hall was named in their honor in 1995. Bus Fraser owned a successful Chevrolet dealership in Bellingham and passed away in 2004. Alice died in 2014 at age 102 – soon after her 100th birthday, she had cut the ribbon at a rebuilt Whatcom Middle School as the school’s “oldest living graduate.”

“They were both always interested in participating in and giving back to the community,” says Al Froderberg, a longtime Western administrator. “Both Bus and Alice wanted to give money to Western because this is where they made their money, in this community. You leave it where you made it.” 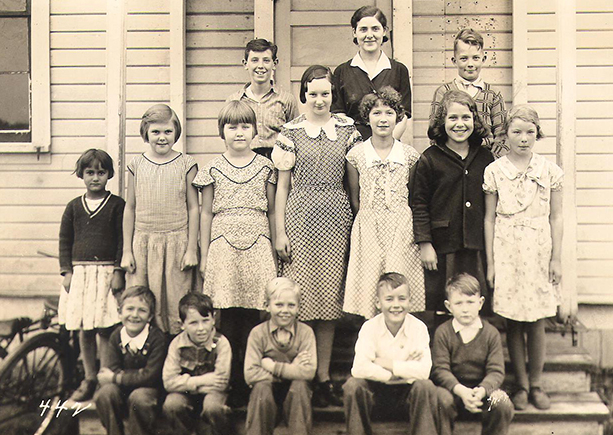 During the Depression Alice Alice (Cowgill) Fraser, back row, center, taught in Ferndale after earning her teaching certificate from Western.