An Ocean of Stories

Wayne Richter, curator of Western’s Mongolia collection, was recently awarded the Order of Altan Gadas (the Order of the Polar Star), the highest state honor given by the president of Mongolia to a foreign national. Past recipients include Barack Obama,  Hillary Clinton, John McCain and WWU Professor Emeritus of History and East Asian Studies Henry Schwarz.

Friendship, the kind forged among scholars working in the same obscure academic field, helped build Western’s Mongolia Collection of books and artifacts into one of the largest in North America, second only to the Library of Congress.

“Other schools did not collect in the same way,” says curator Wayne Richter (’68, Geography). “There are a few things at Harvard, some at Berkeley and a few other places. Indiana has a decent collection and Princeton has purchased the library of Walther Heissig, a major collection by an eminent Mongolist. The Library of Congress has the largest, and we’re the next-largest.”

The core of the collection is from WWU Professor Emeritus of History and East Asian Studies Henry G. Schwarz, who established the collection in the early ’70s with items he accumulated in his travels through Mongolia, China and the surrounding region.

Both Schwarz and Street worked with – and drew career inspiration from – Nicholas N. Poppe, a world-renowned Mongolian language specialist who passed away in 1991. Partly due to his friendship with Schwarz, Poppe left his private library to Western rather than to the University of Washington, where he had taught for nearly 20 years. A student of Poppe and a retired professor from Indiana University, John Krueger, also donated many valuable books to the collection.

“I first corresponded with Henry some 32 years ago, after seeing his book on Mongolian bibliography,” says Street, whose particular area of interest is the “Secret History of the Mongols,” a 13th-century text detailing the ancestry, life and career of Genghis Khan. “It was primarily Henry’s example that led me to Western: We agree on the importance of collecting scholarly publications dealing with this geographical region that has traditionally been of such little interest to the United States, and we both hope that we might have some small part in bringing Mongolia – its people, history, languages and culture – to the attention of students at Western and elsewhere in this country.”

Well-used by visiting scholars and by the 3,000-strong Seattle-area Mongolian community, the collection offers a deep perspective on an ascending region: As scholars like Schwarz, Poppe and Street developed expertise on this corner of the globe, Mongolia has evolved into one of the world’s fastest-growing economies thanks in part to its mineral wealth. It’s also of growing interest as China’s northern neighbor.

“Everything you and I learn, we learn better by perspective,” explains Schwarz. “China is such a massive country, it’s such a great civilization, but you would understand it better if you have some counterpoint. That counterpoint is Mongolia: It’s a different religion, a different economical system – it’s a herding culture and economy. Such a different practical and lifestyle structure gives you a whole different mindset.”

Richter was part of the first Western group to visit Inner Mongolia and study Mongolian with Schwarz back in 1981 and has worked with the collection for more than 30 years. He counts among his favorite items an 18th century Buddhist xylograph whose title, in various parts of Asia, has been both “The Sutra of the Wise and the Foolish” and “The Ocean of Stories.”

“The collection is so varied and interesting,” says the 75-year-old. “It keeps my mind very active.” He pauses to laugh. “I’ll probably never retire.” 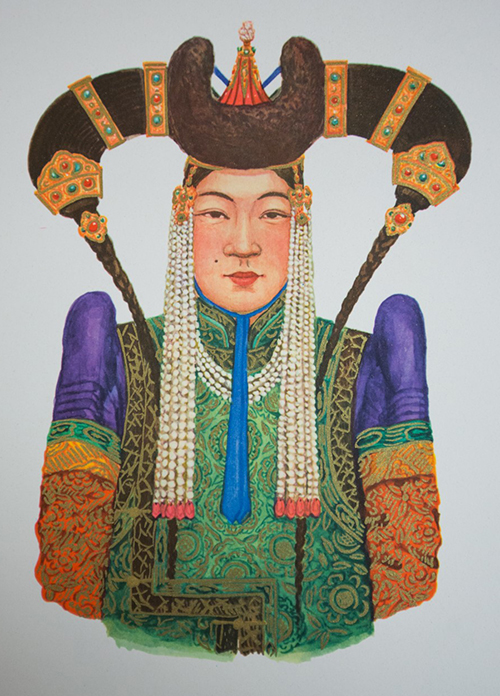 This illustration shows a Mongolian Khalkha costume with pearl ornaments and a beaver cap. The artwork is on leaf no. 28 in a 1967 collection of portraits, “BNMA Ulsyn ardyn khuvtsas,” by Urjingiin Yadamsuren and located in Western’s Rare Book Collection.